Knee Disarticulation
At Northcliff Orthopaedic Centre provides Through Knee Prosthetics / Knee Disarticulation. We make use of Otto Bock Polycentric Knee Joints for Trhough Knee Amputees / Knee Disarticulation.
The through knee is the most distal amputation in which normal knee function is completely lost by the amputated patient. In biomechanical terms the problems are very similar to those of the above knee amputation level. However, the physical differences may be of considerable importance in the prosthetic procedure. The end of the stump is composed of tissue normally adapted to weight-bearing in the kneeling position. A long lever arm is available for the exertion of control forces by the hip muscles and the muscles themselves are, for the most part, intact and operating in a physiological condition.

Socket Design
A good Through Knee stump can take the largest part of the vertical support load on the end-bearing surface. The design of the prosthetic lower limb socket must take into account those forces which will be applied between prosthesis and stump during walking. It must provide for the application of these forces in such a way that load is transmitted to pressure tolerant areas while avoiding pressure sensitive. It must also be fashioned to apply these forces to tissues of varying stiffness, avoiding excessive pressure on the stiffer tissues and minimizing unwanted relative motion due to the excessive compression of soft tissue.

Knee function
The functional loss suffered due to the absence of the normal knee joint is considerable for the Through Knee Amputee. The knee joint is capable of a large range of motion, actuated by powerful muscle groups, and is of great functional importance in normal locomotion. Restoration of locomotion may only be achieved by an adaptation in gait, optimum utilization of remaining musculature and the provision of passive mechanisms. The biomechanical problem may be considered in terms of; the stance phase and, the swing phase.

Stance phase
The Stance phase is the requirement for stability at heel strike as the body weight progresses over the support point, coupled with an ability to initiate flexion, preparatory to swing through. It is possible to provide these actions in some measure, and under voluntary control, by hip action - extensor muscle action at the hip can maintain knee extension and knee flexion may be initiated by hip flexor muscle action.

Swing phase
The Through Knee Amputee is facing two problems in the swing phase:
The replacement of quadriceps function in decelerating the upward movement of the shank after toe-off.
Replacement of hamstring function in decelerating the shank in the later part of the swing phase.
These functions cannot be effectively provided under the voluntary control of the hip muscles but can be passively reproduced by mechanisms which develop a moment at the knee, resisting motion.
Examination of the functional requirements of the stance and swing phases shows that certain functions may be controlled or provided by the hip musculature, whereas others require the provision of mechanical devices. In terms of those functions requiring the use of the hip muscle groups, the Through Knee Amputee is presumably at an advantage over the Above Knee Amputee because of the physiological integrity of the thigh muscles and the length of lever arm available.
We make use of Otto Bock Polycentric Knee Joints for Through Knee Amputees. 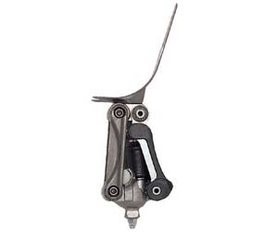 The 3R32 Titanium polycentric manual lock, locks for swing phase, for knee disarticulation.
The Modular Polycentric Knee Joints with lock 3R32 (titanium) and 3R23 (stainless steel) are to be exclusively used for the prosthetic fitting of amputations of the lower limb. The 3R32 & 3R23 are recommendation for amputees with mobility grade 1 (indoor walkers). Approved for a patient weight of up to 125 kg. Due to the lock, the knee joints are especially recommended for patients, who require a high degree of stability. 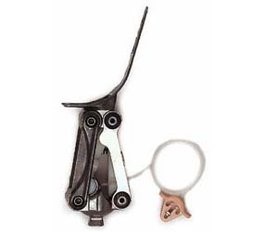